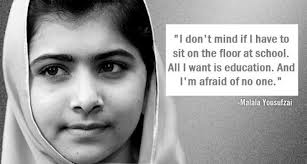 At Carnegie Hall in New York last night, activist Malala Yousafzai gave an impassioned speech about about girls’ access to education. Malala’s dream is to some day be the Prime Minister of Pakistan though one wonders if this dream will ever come true in a country whose 40,00 private schools have banned her book and the Taliban still wants her dead.

Malala Yousafzai was shot in the head by the Taliban in October 2012. The Taliban objected to Malala’s criticism of Islam, which limits girls’ access to education. Malala has since recovered and has written her memoir “I am Malala,” which contains valuable life lessons about leadership, fearlessness, bravery and conflict resolution. She has gained global prominence with the “The Malala Fund” which supports education for girls and she has been travelling all over the world doing speaking engagements. Recently she was invited to meet with our Queen and also has won the top EU Sakharov Prize for freedom of thought.

The India Times has a short slide show which highlight a few of these lessons.